The Charm of Algarve's old buildings

Through the ages, each ethnic group has left behind its cultural footprints

The is steeped in history. Local customs, cuisine, beverages, music, song, dance and architecture, are all reminders of the many diverse peoples who have ruled this stretch of southern Portugal over the centuries.Through the ages, each ethnic group has left behind its cultural footprints, and this enchanting region continues to be influenced by the growing number of foreigners who choose to settle here.

The Romans were skilled builders. In the 2nd century BC, they took control of the Algarve and began constructing roads, bridges and aqueducts. They also introduced early forms of plumbing and decorated their buildings with fine mosaics. Youâll see many examples of Roman built villas and Roman vestiges in the Algarve - a number of the ruin sites have been maintained as tourist attractions. Cerro do Vila, a Roman built home in central Vilamoura, is a great example of the skill and creativity of the Romans. Another is the Milreu ruins in EstÃ³i, near Faro.

The North-African influenced styling of the Moors in the early 700s, can be seen today in national landmarks such as the wonderful red stone Castle in the centre of Silves. Close by, in Paderne thereâs a second great example of a Moorish castle and, to the west in Aljezur, the remains of its tenth-century Moorish castle sits on a hilltop overlooking the picturesque town.

The Palace of EstÃ³i was built in the 18th century. Its late Baroque (Rococo) styling is more graceful and less garish than the earlier Baroque. Local nobleman Fernando Carvalhal de Vasconcelos, had the idea to build the Palace. The building was completed in 1909 by JosÃ© Francisco da Silva, who became the Viscount of Estoi. Classified in 1977 as a property of public interest, The Palace of Estoi is now a luxury hotel (Pousada). 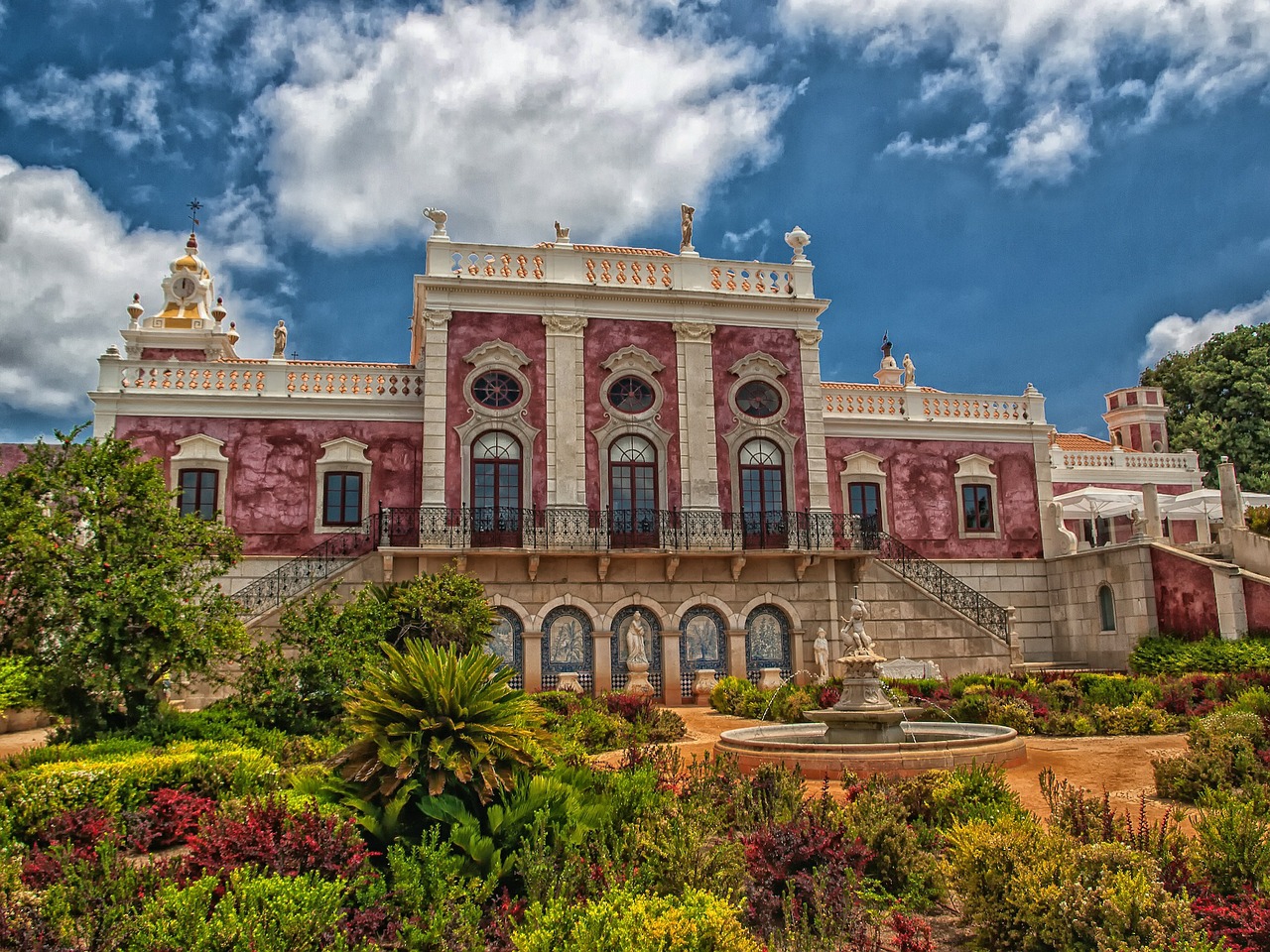 In the mid-13th century, the Portuguese built two Gothic style cathedrals to mark the reconquering of the Algarve from Muslim rule. Their typical gothic features such as pointed arches, buttresses and ribbed vaulting can be seen today: one cathedral stands next to the castle in Silves and the second is in Faro.

Itâs fair to say that churches are plentiful in Portugal. Youâll find a church in just about every Algarvean village or town - in fact youâll find 23 in Tavira alone. If youâre interested in the history of the area, donât pass by a church without a look inside â some hold a few surprises. Such the Capela dos Ossos (Chapel of Bones) which adjoins the parish church Nossa Senhora da ConceiÃ§Ã£o in Alcantarilha, Silves, or the Capela dos Ossos next to Faro cathedral. A little macabre perhaps, but nonetheless interesting - the walls of the chapels are lined with meticulously aranged human bones and skulls. 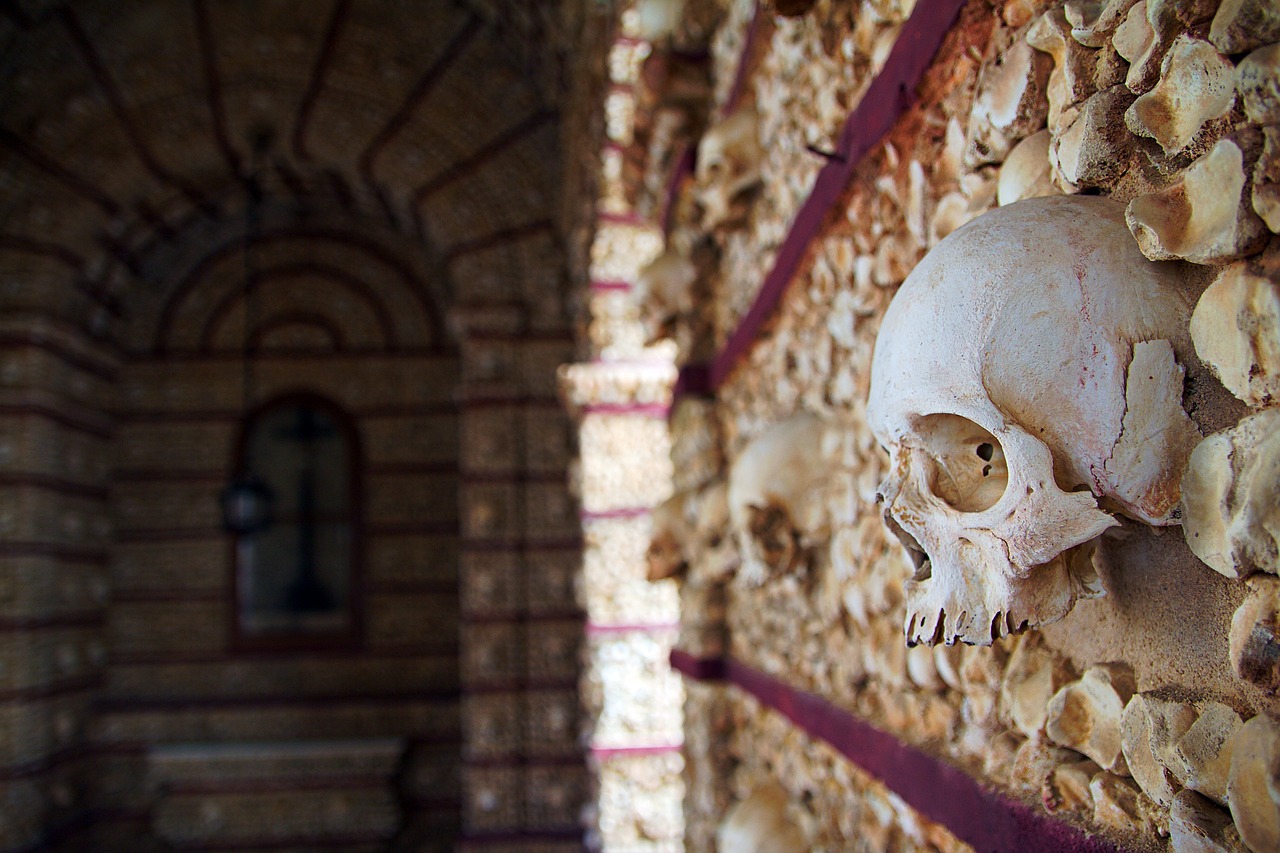 The magnificent Manueline style door of the Santa MisericÃ³rdia Church, opposite Silves Cathedral, and the decoration around the windows and doorways of the parish church in Santa BÃ¡rbara de Nexe are two of many great examples of the short-lived architectural period known as Manueline - named after Manuel âthe fortunateâ, the king of Portugal who ruled from 1469 until his death 52 years later.

In the 17th century, the elaborate and somewhat ostentatious Baroque became the new trend in Portuguese architecture. Where the exterior of many old churches across the region is quite plain, step inside and youâll be surprised by the ornate styling. The Igreja da Ordem Terceira do Carmo de Tavira (Carmo Church) is a good example with a magnificent ensemble of carved gilt altars, including the one in the chancel which is regarded as being the most interesting Rococo altarpiece in the Algarve.

There are numerous convents across the Algarve too. Now decommissioned as religious buildings, some have been converted into hotels which offer an interesting history alongside luxury accommodation.

One of the oldest religious buildings in the Algarve is the Convento de Nossa Senhora da AssunÃ§Ã£o (Convent of Our Lady of the Assumption) in Faro. Built in the early 1500s the old convent is one of the finest examples of early Renaissance architecture in the Algarve. Today, itâs Faroâs Municipal Museum and it houses archaeological findings from Roman and Medieval times, as well as many art collections.

To the east in the centre of historic Tavira, the Convento da Graca is now a stunning hotel (Pousada).

Still in Tavira, youâll find a second hotel which began its life as a convent in the 1600s. Convent de Santo AntÃ³nio is a carefully restored boutique hotel.

Convent of SÃ£o JosÃ©, Lagoa, believed to have been founded in the 1700s, is a modern day cultural centre which hosts exhibitions, as well as various community events.

Sadly, the Manueline-style Franciscan convent, Nossa Senhora de Desterro (Our Lady of Exile) situated in the Monchique hills, has been abandoned and is slowly falling into ruin.

Take a drive through the Algarve and youâre bound to spot more than one or two old mills. These structures became a familiar sight across the region in the late Middle Ages  -  circular buildings with conical roofs and whitewashed walls, set against the backdrop of the Algarvean blue sky. Windmills, tide mills and watermills, all harnessed natural power to grind corn and wheat, and while many have been left to crumble, there are several wonderful illustrations of how these structures can be restored and put to use again.

The Moinho Bengado windmill in SÃ£o BrÃ¡s de Alportel is one such example. Another is the working tidal mill (Moinho de Mare) at Quinta do Marim, in the Ria Formosa Natural Park. This tidal mill is the last of its kind to be in use since the Middle Ages and is open to the public.

No âold buildings in the Algarveâ article would be complete without mention of chimneys. The countless lavish chimney stacks across the Algarve are an important part of the regionâs heritage. Historically, chimneys were a statement of wealth and standing in the community. The more ornate and intricate the design of the chimney, the longer it would take to build and, therefore, the more it would cost the homeowner.

Aside from the large and ornate chimneys atop the Algarveâs old building, youâre also certain to spot a few less attractive but nevertheless noteworthy stacks - old factory chimneys that youâre likely to encounter incongruously towering over a new development. Look more closely and youâll see them topped with nesting white storks. Now a protected species in the Algarve, itâs illegal to demolish the storksâ nesting places. And, since storks return to the same nest year after year, the chimneys are here to stay for the foreseeable future.

Despite the fact that youâll stumble across many abandoned primary school buildings while travelling through the Algarve, the opportunity to buy one of these properties is quite rare. Several of these old structures are identical in design and date back to the 1940s, when the Plano dos CentenÃ¡rios (Plan of Centenarians), a project launched by the Estado Nova (New State) to ensure that all children were able to access a basic education. A total of 7,000 schools were built throughout Portugal, each following the same architectural model.

Some of these primary schools are still operating, though a vast majority were decommissioned in more recent times and children were diverted to schools in the cities and towns. A proportion of these buildings have been put to good use within the community, a small number have been sold off and have been converted into charming homes or businesses but, sadly, many stand empty.

In times gone by, before the Algarve became a tourist attraction, the wealthy Portuguese favoured the cooler climes of northern Portugal. Thatâs why there are relatively few grand old residential properties in the region. However, those that you will find in the Algarve are quite remarkable. Casa de Estoi was built in the 1900s and, as is the case with many Portuguese homes, has remained in the same family. The house has been carefully converted into a delightful guest house, retaining the traditional features and ambiance.

Parque da Mina is an 18th century farmhouse which sits in a prime position, just before the entrance to Caldas de Monchique and was once home to one of the regionâs wealthiest families. Passed down through the generations, the current guardians have opened the estate to the public as a living museum.

There is a growing appreciation among property buyers in the Algarve for some traditional elements and design, yet they still want their properties to be stylish, comfortable and sustainable. Combining the two is not impossible and the services of expert builders who combine an appreciation of the expertise of the past with the technology of the future, such as Mestre Contrutivo, can result in unique and charming properties.

There could be more

Thereâs a wealth of old buildings in the Algarve â this article mentions but a few. And, if Dr Roger Coghillâs or Peter Daughtreyâs theories are correct, there could be more lurking below us. Daughtrey and Coghill are both convinced that the lost world of Atlantis is right here in the Algarve.