A magical world of light in Loulé, Algarve

The LUZA Algarve International Festival of Light will take place in LoulÃ© from 24th to 26th November 2017. The Festival, the first of its kind in the region, is set to bedazzle and bewitch with a series of impressive and interactive installations throughout the town. LUZA will showcase the work of world class artists while also being a completely accessible and ultimately fun experience for all ages.

LUZA is the brainchild of Beau McClellan, artist and designer of amazing light installations and Eventors Lab - the chemistry of events. From his LoulÃ© based ByBeau creative studio, Beau's works can be found all over the world. The LUZA Festival, driven by Beau's and the Eventors Lab creative energy, brings together artists from the UK, Germany, France, Poland, Spain, Portugal and Japan. (See the full lists of artists below). The aim is to bring an innovative light event to the Algarve, placing the region firmly on the map of international light design festivals such as those in Paris or in Torino, Italy.

Over the three days of the festival, at which entry is free, those attending can enjoy a wealth of sensory experiences at some of LoulÃ©'s iconic locations such as the video mapping display on the walls the famous LoulÃ© Market, by Granda's Lab. At the "Meet Dimple" installation at the Convento de S. AntÃ³nio, 600 "Dimples by Beau" are suspended in a mirrored box. Each Dimple is a handblown glass pendant, with smooth mirrored curves that reflect the natural light. Each Dimple also contains an individually controlled LED light, synchronized to music so that the Dimples seem to shimmer and move to the music, as if alive. The mirrored box reflects the Dimples, giving a sensation as though suspended in an infinite, rippling, ocean of light.

The "Ring of Mist" installation, brings together music and lights and the participants are the generators of their own, unique experience. Within the "Ring of Mist", there are 8 doorways to enter. Each one evokes different sounds and lights. Participants enter the doors in any order they wish, creating their very own soundtrack and experience, with thousands of possible versions. The soundtrack can be downloaded and kept as a very unique memory.

Among the highlights of LUZA will be the Torch Light Parade on the 24th Nov.. Starting from the MÃ£e Soberana church, 2.000 lit fire torches will be carried by the festival attendees, culminating in a final design that will only be revealed at the end, transforming all those in the parade into artists for a shared moment. A donation of at least â¬1 per torch is required and reverts to a local children's charity - A Casa da Primeira InfÃ¢ncia. The Torch Light Parade is also a shared link with the town of LoulÃ© and it's traditions, reflecting the annual religious "Festival of the Soverign Mother", one of the largest religious festivals in Portugal.
On the 25th Nov. there will be a festival conference, in the style of relaxed chat show, at the Cine Teatro Louletano, entitled Working with Light, with the participation of various artists and actors.

18h30 â âTorch Light Paradeâ
(To purchase your torches and take part in the parade, please meet at MÃ£e Soberana)

18h30 - Opening of the remaining installations

18h30 - Opening of the remaining installations 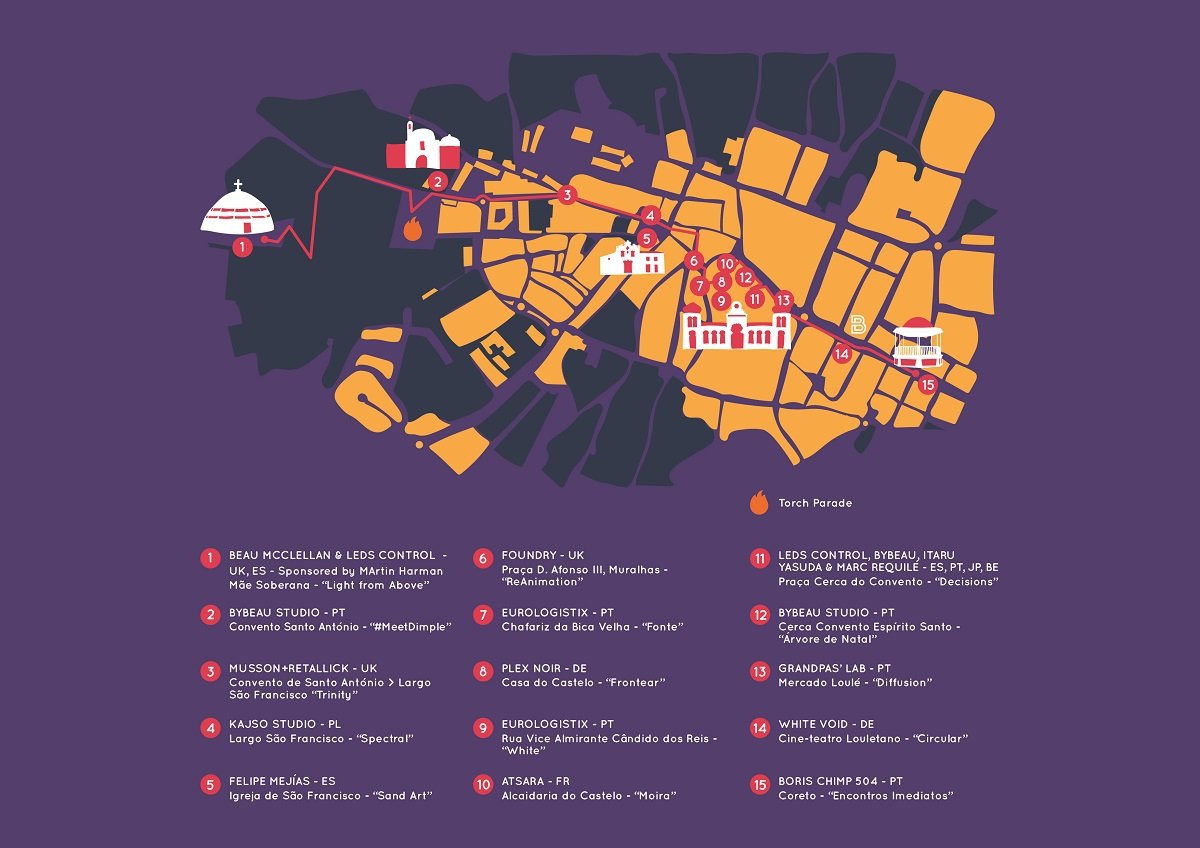